Remembering – A Time of Great Purpose

Wendy Poole’s debut book, Remembering – A Time of Great Purpose, is a masterfully researched, well written story spanning almost a century and crossing three continents. Wendy skillfully meshes actual historic events and timelines with stories that capture our imagination and bring us fully into the moment with the personal and family experiences being narrated.

Wendy has a passion to ensure the history of her family, and those who were important to them, is told with honesty, insight, and humour, and honours their dedication and commitment to the lives they led, and gave, to serve their countries.

It has been such a pleasure to work with Wendy through the writing and publishing process. What comes across so strongly is her focus and attention to detail with the hours and hours of research she did, not only about her family, but the historic events they lived through. You will learn, as I did, so much about the first and second world wars, especially the day-to-day and year-to-year realities of those who lived and fought during these times.

Enjoy my written interview with Wendy below and be sure to check out her book page in the I C Bookstore.

What inspired you to write this Book? 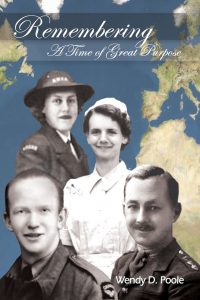 Growing up I loved listening to my mother’s stories about her life. In 1997, I began to record her when she spoke about family, growing up, and her time in the Canadian Navy during WWII. I knew that once Alzheimer’s had ultimately stolen those memories, it would become my turn to tell her her stories. Stories that I would always begin with, “Your name is June . . .”

Years later, I started to write this book. Initially, I thought its main focus would be about her time in the Canadian Navy. She was one of the five hundred WRCNS stationed in Great Britain, but I then decided to include a dear friend of mine who had a German background and lived in the Berlin areas before and during the war years. Over our many years of friendship, as she spoke about her childhood and life during that time, we would look through her personal photo and postcard albums that provided a backdrop to her stories which subtly reflected the increasing Nazi influence.

What do you want others to gain from your book?

I think researching is interesting. It can be both challenging and rewarding. Searching for factual information and confirming it through various websites, books, reference materials, archival manuscripts, and museum exhibitions all helped me to provide a historical timeline. It also made me recognize that the storyline should be expanded and include two more family members. My father had enlisted in the Royal Canadian Air Force (RCAF) and had been stationed in Great Britain, as well as North Africa and Italy in WWII. Plus, my uncle had enlisted with the Hastings and Prince Edward Regiment (also known as the Hasty Ps), which was part of the 1st Canadian Infantry Division. He had been stationed in Great Britain, fought in Sicily, Italy, as well as the Netherlands. I realized that their stories would also be worth researching and writing about.

Researching offered me the opportunity to learn more about not only my mother, dad, uncle, and friend, but also provided an opportunity to learn about the many men and women—on both sides—who had lived, fought, and died during World War II. That is when I decided to create other individuals who would add to the backdrop of that era because I was learning, for example, so much about U-boats along the Eastern coast of Canada and convoys crossing the Atlantic, the Murmansk Run, and crossing what was called the Atlantic’s Black Pit.

I hope that those who read my book will feel that they have also gained/discovered new insight into that time period.

What was your creative process for this project?

This book went through several rewrites. It was recognized that, at times, the flow of the storyline was awkward. Eventually I realized that Dee, as June and Stan’s daughter, was the glue that could bond these four people’s stories and the several characters that I had created if I used the six degrees of separation theory. The final result was this book.

Why did you choose the story-telling format you used?

My parents, uncle, friend, and relatives provided actual places, dates, and events for the storyline, and elements of their stories are true. However, other parts of this story come from my imagination. The additional characters that were created allowed me to include other factual elements that came from the research that I had done, which added to the overall storyline.

For me, the historical facts or trivia bits were as important as the storyline. We shouldn’t forget the educational value of learning about past events because understanding them can provide a deeper appreciation of the world that we live in now. Knowing that Charlie Chaplin and Adolf Hitler were born in the same month and year is just as interesting as knowing that, in 1933, Japan withdrew from the League of Nations Assembly after the adoption of a report which recommended that they withdraw their troops in Manchuria and agreed to Chinese sovereignty over the area. That three years later, Japan, Germany, and Italy formerly declared their partnership with each other. One is historical trivia, perhaps just party chat, and the other is an historical fact that did impact world events.

What’s next for you as an author?

I have three children’s stories tucked away that I might take another look at. I think they could have potential with some editing. A friend recently asked me if one of the female characters in the book had died because she isn’t mentioned after 1943. I have played with the idea that perhaps she has another story to tell. Hmmm, maybe yes, maybe no.

Remembering – A Time of Great Purpose compels us all to reflect on where we’ve come from, and the sacrifices others have made to keep us safe and contribute to the life and freedom we know. It’s near impossible to fully comprehend another person’s journey let alone generations gone by, however, stories like this can certainly enlighten and encourage us to appreciate and have compassion for those who’ve come before us.

You can order your own copy of Remembering here in the I C Bookstore.

This holiday season, I hope you are blessed with the greatest of health, the deepest of joy, and many memorable moments with family and friends.

Wishing you a very Merry Christmas,

Sheri and Wayne, and the I C Publishing Team

Founder of the Hearts Linked by Courage Project

Bridging the gap between self and traditional publishing